A survey of a sampling of Orinda voters found support for a one-cent, general-purpose sales tax increase but a “a half-cent sales tax has stronger and broader support compared with a full cent,” according to a city report.
Conducted Jan. 31 to Feb. 6, the survey reached 436 residents, or 3 percent of registered voters who are “likely to participate in the November 2020 election.” As of Feb. 10, 2019, Orinda had 14,020 registered voters, nearly 50-percent of whom are Democrats.
Participants were asked to give opinions on the increased sales tax, wildfire prevention, emergency response, road repairs and other topics.
The City Council had planned to discuss the survey on March 17 but the meeting was postponed until at least April over health concerns related to the coronavirus.
The survey was conducted to gauge voter interest in a potential sales tax ballot measure. In 2012, Orindans voted to increase their sales tax by half a percent – to 8.75 percent – until 2022. In November voters could be asked to extend that increase, let it expire or increase it to a full cent.
The increase would provide $2.4 million annually to the city’s coffers.
According to the language used in the survey, the additional funds are slated to help maintain essential city services, including:
• Ongoing repairs/ maintenance to public roads and storm drains;
• Restoring wildlife habitat and recreation along San Pablo Creek, and:
• Emergency/natural disaster preparedness, including wildfire prevention/evacuation planning.
Democrats, voters between the ages of 18-54 and those with annual incomes of more than $250,000 are more likely to support the measure, the survey concluded.
Among the reasons people gave for supporting the tax ranged from, “Infrastructure needs repairing/needs to be maintained” at 45 percent to the “city needs the money,” at 2 percent.
Those who opposed the tax noted “Taxes already high/been paying too much,” at 54 percent to “It will hurt local businesses/people will shop elsewhere” at 1 percent.
Orinda’s 8.75 percent sales tax compares to Lafayette’s 8.25 percent and Moraga’s 9.25 percent. Based on $10,000 spent annually for durable goods, the tax difference between the cities ranges from $825 to $925.
Voters could also decide whether an approved sales tax should include a sunset clause after 10 years.
Survey questions and results can be found at www.CityofOrinda.org.

Orindans Spring Into Action in Face of Virus 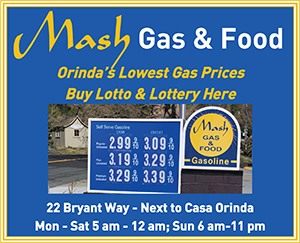 Opera in the Park Returns July 28

Artwork to Welcome Winter in Library Gallery This December

Opera in the Park Returns July 28

Artwork to Welcome Winter in Library Gallery This December