A video from the evening. “Emergency Evacuation Preparedness in Orinda,” is available for viewing on the websites of the Moraga-Orinda Fire District (www.mofd.org) and The Orinda Association (www.OrindaAssociation.org) or viewed below.

Are Orindans prepared for a catastrophic fire? And if so, how prepared are they?
Those seem to be the most pressing questions on people’s minds these days, and they were the topic of a recent emergency preparedness forum led by key players who could provide answers.
In a hall packed with more than 70 attendees, the forum focused on the worst-case scenario for a wildfire in Orinda. Hosted by the Orinda Association, the May 23 forum featured Moraga Orinda Fire District (MOFD) Fire Chief Dave Winnacker, Orinda Police Chief Mark Nagel and Duncan Seibert, program manager of Lamorinda Community Emergency Response Team and chair of the Lamorinda Emergency Preparedness Commission.
“The threat that we are primarily concerned about is a catastrophic regional wildfire emanating out of the wilderness of the Briones watershed to our north, carried by a Diablo wind in the fall, a north or northeast wind,” said Winnacker. “Those winds are not necessarily characterized by high temperature, which is something of a misnomer in the public’s perception. Ambient temperatures are not a critical element in fire spread. Low humidity and high winds are.”
Typically, Diablo winds occur in the fall, but due to climate change, the winds are now preceding the rainy season. “Last year, when the Camp Fire burned, that area was expected to have five inches of precipitation as of that date. Had those sparks come off those power lines after three, four or five inches of precipitation had fallen for the season, they would have landed in a puddle and there wouldn’t have been a fire,” said Winnacker.
Using Orindan John Radke’s work with the Center for Catastrophic Risk Management and UC Berkeley data, MOFD created models of fires starting at Bear Creek Road and Happy Valley at the eastern end of Briones Reservoir with 30 mph winds and low fuel moisture.
“What that model shows is in about four hours most of Sleepy Hollow and the Downs would be consumed by fire and the primary evacuation route from the Downs will be impacted by direct flame impingement and therefore be closed to traffic. That’s a pretty scary scenario,” said Winnacker. “So the next thing done, armed with 37 years of data that goes down to the individual species of vegetation, is to make recommendations for mitigation work within 30 feet of the shoulder on both sides of Bear Creek Road.”
With all conditions being equal, the new model shows that the fire will not jump Bear Creek. “What would have been a catastrophic fire running through about 1,000 homes in North Orinda and down through Sleepy Hollow instead becomes an interesting column of smoke and the loss of some grass range land that will regrow with the onset of the next rains,” said Winnacker.
This second model is what MOFD, the East Bay Municipal Utility District and the Contra Costa Fire Department are working toward with the North Orinda Fuel Break. “This will create an interruption in the continuity of the fuel on the northern edge of the district that will buy us time to prevent a fire from spreading into the populated areas that we are concerned with,” said Winnacker.
However, the North Orinda Fuel Break only addresses the ground component of fire. Fire also spreads through three-dimensional ember paths, flaming objects that can be blown miles in advance of the main body of the fire.
“When those embers come to ground, if they land on receptive fuel beds, a pile of leaves, on a lot with dead grass, a gutter that’s filled with some form of dry matter, it can create a fire in its own right which can grow to be just as dangerous as the main fire. There is no fuel break that can stop the spread of three-dimensional ember paths,” says Winnacker.
The only way to stop the spread of three-dimensional ember paths is to create defensible space. “Every resident must do defensible space work both to remove fuel immediately adjacent to your house, which will elevate the ground component, but also along your entire property. The entire parcel has to be cleared so that if an ember lands, it is less likely to start another fire.”
The process of making your home defensible is straightforward. “Take a lap around your house right next to the perimeter and foundation. Check if there are accumulations of dead grass, dried leaves, dead or decadent plants such as rosemary. With those sorts of things next to your house, you are creating conditions for a fire to start right next to your house,” said Winnacker. “No matter what your house is made of, if there is direct flame impingement on it, eventually it will burn.”
The next step is to go around your house a second time, but looking at the eaves. Are there collections of dead materials, specifically pine needles and leaves in the valleys of your roof and your gutters. If you have those on your roof, you are creating a second fuel bed on your house itself. That’s not a fire that we’re going to be able to put out under these circumstances,” adds Winnacker. Most of the qualities that make plants drought resistant also make them very dangerous from a fire standpoint.
Nagel spoke about the Contra Costa County Community Warning System (CWS). CWS is one of the nation’s most modern and effective all-hazard public warning systems. It uses a countywide telephone notification system, in addition to Twitter, Facebook and email to alert residents to possible hazards. In the event of an evacuation, “this is what we use to tell you to go. You need to sign up for it. It’s a simple process. You go to the website, you click on the buttons and fill out the information. It’s that simple,” said Nagel.

As of May 21, 25.4 percent (4661 registrants) of Orinda, 22.5 percent  (3614 registrants) of Moraga and 17 percent  (4062 registrants) of Lafayette had signed up for the system.
“Another way to look at this is 75 percent are not, so we will continue our efforts in stressing the importance of our ability and method of communicating to you,” said Nagel.
In addition to CWS, Nixle (www.nixle.com) also aids emergency services in getting alerts to people. “We use Nixle for road closures, police activities, and when the fire district does controlled burns. There’s 9,347 texts and 3,369 emails for Orinda signed up on Nixle,” said Nagel. “The population of Orinda is about 20,000, so we have some work to do and we will keep at it.”
Seibert focused on emergency preparation – what can be done now to make recovery from a disaster easier. He helped write the Lamorinda Resident’s Guide to Wildfire Preparedness and Evacuation, which every Orinda resident should have received in the mail. “Critically important for all of us are the evacuation pages,” said Seibert.
These pages of evacuation tips include sections on what to do now, what to do when there is a red flag warning and what to do at the time of evacuation. “Do the things you can do now that you won’t be able to do when you need them done. Do them now because you have lots of time now. You won’t have lots of time when there’s a fire,” added Seibert.
The first thing to do is get a go-bag ready and place it near your car so you can grab it on the way out and have your essentials: ID, credit cards, some cash and important documents like medical prescriptions. “For animals you have to do the same thing. Your animals need their essentials: medications and a little bit of food,” said Seibert.
Another thing to think about is your insurance – do you have enough insurance to cover time out of your home in the case of a disaster? Seibert says, “How many days out of your home will the insurance pay for you to stay in a hotel?
In the big wine country wildfires, they haven’t even started reconstruction on a lot of those homes. The people in Paradise will be out of their homes for three to four years. “Could you afford to pay for a hotel for three to four years while your home is being rebuilt? Your insurance will probably pay for 18 months to two years. Check your policies,” added Seibert.
When there are red flag warnings, plan accordingly. “Don’t leave your car in the garage if there’s a red flag warning. If you have a gate, open the gate and leave it open,” said Seibert. “Park your car in your driveway heading out to the street. You don’t want to be backing out into a line of traffic. You want to go forward into it. It’s much safer and much easier. Make sure you have 3/4 of a tank of gas because gas stations without power can’t pump gas.”
In the case that your home is destroyed, you will have an easier time if you have photographic proof of your possessions. “Take your cell phone and walk through your house and photograph everything. Take a video and talk to it. Say ‘that grandfather clock came from my parents, they bought it in 1908’ and so forth,” said Seibert. “That’s how you prove that you had it so your insurance will cover it. If you can’t prove you had it, it becomes very dicey.”
“The conditions that have created historically bad fires on a periodic basis are now a recurring annual event,” said Winnacker. “Our exposure to the potential of one of these large scale fires is here and it’s here to stay.”
For more information, visit www.mofd.org, www.lamorindacert.org, www.cwsalerts.com, and www.nixle.com. A video from the evening is available for viewing on the MOFD and Orinda Association websites. 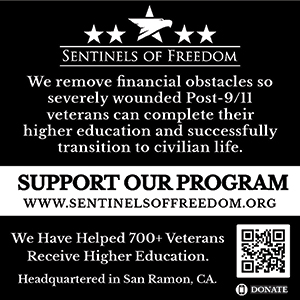 Latest Artworks Make a New Home Outside the Orinda Library

Voters Can Learn More About Candidates at a Series of Public...

My One-Month in the Ukraine War