Carol Stewart Penskar, a long time Orinda resident, passed away due to complications of Parkinson’s disease on June 25. She was 68.
Giving back to her community was very important to Carol. She was a founding member and treasurer of the Orinda Community Foundation and spent years on Orinda’s Finance Advisory Committee. The Orinda Association named her 2017 Volunteer of the Year along with Jim Luini.
“Carol was a good friend and invaluable community volunteer,” said former Orinda Mayor Sue Severson. “She was always willing to step up and help where needed. I enjoyed working with her over the years in many ways including the founding of the Orinda Community Foundation.” Severson noted Carol’s support also included Orinda’s schools, fixing Orinda roads and generously sharing her financial expertise.
“Beyond her love of family was her passion for tennis,” Severson added. “Carol will be greatly missed but her legacy of cheerful service and the causes she championed will go on forever.”
Carol and her husband Mark Howard Penskar moved from Michigan to the Bay Area in the late-’70s. She earned her MBA at UC Berkeley in 1979, graduating as her MBA class valedictorian and going on to become a Vice President at Bank of America. To gain flexibility and more time with her growing family, Carol left the banking industry and became a self-employed financial consultant.
When not working, Carol enjoyed racquetball, windsurfing, tennis, music, volunteering, traveling, and, later in her life, playing bridge. She became a Bridge Life Master in 2014.
Carol is survived by her husband Mark, brother Jim (Karen) Stewart, sister Connie Stewart (Jeff Lawrence), and her two children, Becky (Michael) Gherini and David Penskar.
In lieu of flowers or gifts, donations can be made to: Orinda Community Foundation, https://orinda2010.wixsite.com/ocfwebsite, or OCF, PO Box 21, Orinda, CA 94563. 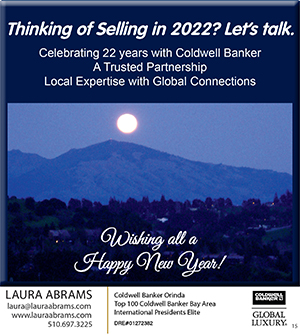