Girls, would you like to be an Eagle Scout?  Now you can. Scouts BSA, formerly Boy Scouts of America, has girls’ troops, including one in Orinda with 13 members.
Angelica Steinmeier, a leader of this troop, said her ninth-grade son, William, is in a boys’ troop, and his sister, 12-year-old Aimee, has always wanted to do everything he did, especially the more rugged outdoor activities.
“I especially like the camping trips, but also the wide variety of badges,” said Aimee. “Those I’ve earned so far are canoeing, first aid, public health, medicine, swimming, environmental and physical fitness. My brother is a Life Scout, working on his Eagle award. I want to catch up to him.”
Co-leader Christina Loughran has an experience similar to Steinmeier’s.
“Our son was in Scouts and did a lot of camping but formerly Caitlin couldn’t go along so it split up our family. Now boys and girls troops are linked,” she said, referring to Troop 303 with a G for girls or a B for boys after it — 303G and 303B.
Both meet at the same place, the same night so parents just have one trip for both kids. At the meetings, part of the time both troops are together, but they also spend time separately — the same with outings. For many families with several children this really works well, makes life easier — and more fun.
“One of the things that impresses me is how in Scouts BSA the older Scouts learn great leadership skills as they mentor younger boys and girls,” said Clinton Yap. “My daughter, Ava, definitely likes the more active out-of-doors opportunities, which she feels she has now in Troop 303G. I serve as the advancement chair in my daughter’s troop so see firsthand the wide diversity of merit badges they pursue.”
Ava said camp last summer with boys and girls was the most fun she’s had in this new troop.
“I liked having girls and boys making friends and doing hikes together. While there, I earned badges in basket making and archery. Recently our girls’ troop hiked the Lafayette Reservoir Rim Trail of five miles. It was the first time we’d been together since the pandemic era began, so it was wonderful to be with those friends again. Wearing masks all the way caused breathing to be harder, but we made it.”
Orindan Bruce McGurk, Briones District chair, said girls could join Cubs in early 2018 and then in February 2019 Scouts BSA. Quickly, area girls’ troops formed.  Orinda has one girls’ troop and Lafayette has three, but so far there are none in Moraga.
Each troop has an experienced adult Scout volunteer, a Unit Commissioner (UC), to assist adult leaders. The Briones District includes Lamorinda, Walnut Creek and Pleasant Hill.
“I have also served as a Merit Badge Counselor for girls as well as a lot of boys,” said McGurk. “Working on the Camping MB, one of the girls did very well. Often she knew the material better than the guys.”
The parents enjoy the scouting experiences too. Steinmeier recalls, “One of the best experiences in Scouts BSA was a shoreline clean-up project which Troop 303G did at Martin Luther King Jr. Regional Shoreline. With eight Scouts, we picked up over 20 big plastic bags of debris. Most of the trash was at the water’s edge and would have ended up in the ocean. Reclaiming the beautiful shoreline by removing old shoes, jackets, plastic bottles, lighters and the like was a joyous experience for all of us, even though we were all exhausted at the end of the day. The Scouts could see and feel the impact our work had on the environment.”
Yap said his best experience was spending six days at the summer Scout camp with his daughter and the other boys and girls.
“I saw her gain confidence and independence in a safe environment where I am, but not helicoptering around her. This happened because of the experiences the amazing Scout camp staff provided,” he said.
Loughran remembers a back-packing trip of more than 10 miles near San Jose, a Tilden Park campout and an urban camp-out when the girls’ troop met at St. Stephens Church, hiked to see a movie at the Orinda Theatre and then hiked back.
Another special trip was with the boys’ troop to Indian Rock in Berkeley.  “Our activities are limited now, but many Scouts find they have more time to work on badges,” she said.
The girls’ troop had three outings planned in August. The first was China Camp in San Rafael doing waterfront camping as a special request from the girls. The second was a one-nighter at Portola Redwood State Park in Santa Cruz. The final was a river rafting trip at the end of August. The second and third events were potentially open to boys depending on the number of signups which needed to be limited to maintain social distancing.
Troop 303 typically has one recruitment event a year, with the date yet to be announced. For more information, girls may email angelicasteinmeier@gmail.com, and boys may contact Jeremy Steinmeier at j_steinmeier@hotmail.com. 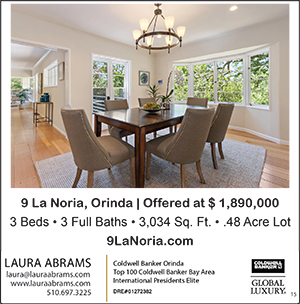