Luca Katalin Gerö was born December 13, 2001, at St. Luke’s Roosevelt Hospital in New York, overlooking the smoldering rubble of Ground Zero – the aftermath of the terrorist attacks of 9-11. She was born a survivor: her mother, Réka Pigniczky, was six months pregnant with Luca as she covered the attacks for the Associated Press. Dodging the crashing WTC towers, it was a miracle that Luca and her mother survived.
That rough beginning and the war-like aftermath of living in New York did nothing to dim the light Luca emanated from the day she was born. Her very name: Luca, an archaic Hungarian version of Lucia, means light. And her light shone from the day she blessed this world to the day it was extinguished all too soon in a horrendous fire that destroyed her family’s home on Nov. 18.
Luca was the beloved first child of Barnabás Gerö and Réka Pigniczky. When Luca was six months old, the family moved to Budapest, Hungary (her father’s childhood home and her mother’s ancestral home). For her doting grandparents there, Luca was the first of 11 grandchildren, including Luca’s siblings Jolán and Lukács.
The Gerö household was always bursting with children and activity, with Luca the ringleader. She was an impetuous and joyful child who met the world head-on. Even as a toddler, Luca befriended everyone she met and climbed every tree she saw. Together with her sister Jolán, Luca attended the Zoltán Kodály Music School and sang in the Hungarian Radio Children’s Choir. She also sang in the children’s choir of the Church of St. Anthony of Padua, where she received her First Holy Communion.
In 2012, Luca moved with her family to Orinda (her mother’s childhood home). Within months, Luca had made herself comfortable with a brand new circle of friends at Del Rey Elementary School. Before she even spoke English properly, she captivated the school talent show with a song about Hungary and the friends she’d left behind.
Luca enjoyed rock climbing, read voraciously in both English and Hungarian, and liked to write. She played volleyball competitively until her sophomore year. She loved to travel, hike and ski with her family; she was planning a trip to Bhutan with her mother as a high school graduation gift in 2020.
As she became a teenager, her childhood chattiness sharpened into a sophisticated verbal ability she deployed to defend her opinion on any issue at hand. Her mother’s suggestion that she join the Debate Team at Miramonte High School was inspired. Debate was not an academic exercise for Luca; it was how she made sense of the chaotic post-terror world into which she was born. She learned to use analysis and criticism to take a stand and defend it, with eloquence and wit. She planned to become a lawyer.
She had an incredible sense of humor, empathy toward those in trouble, and fierce loyalty to her friends. Even in her teenage years, she was open and honest with her parents, much more likely to spill the beans than to tell a lie.
Since childhood, Luca was an enthusiastic member of the Hungarian Scout Troop of the San Francisco Bay Area. She was a natural leader of the younger scouts in her charge. Among her scout peers, it was often Luca who set the tone, came up with the skits, wrote the songs, and rattled off zany ideas in her signature mile-a-minute chatter.
Luca’s natural magnetism drew many friends from her many communities, but she knew her essential home was her family. Only a few weeks ago, Luca defied her parents’ wishes and got herself a small tattoo. Just four discreet letters on the inside of one finger: rblj—representing her mother, father, brother and sister, whom she loved indelibly and permanently.
Luca lived life as it was meant to be lived, full of love and inquiry and the yearning for justice. Love is what drove her and gave her the ability to not fall prey to pettiness, insecurity, or hatred. Even as she argued and sought the truth, she remained respectful and tolerant.
Now, that powerful love is all we have left of Luca. Though her loss and our grief are infinite, we can still cling to that love. As we return to our everyday lives in a world marked by brutality, intolerance and injustice, we honor Luca best by following her example, by radiating love and forgiveness to our families and communities.
Those left to cherish Luca’s memory include: parents Réka Pigniczky and Barnabás Gerö; sister Jolán; brother Lukács; grandparents Katalin Vörös (Wayne Phillips), Dr. László Gerö and Dr. Eszter Jánossy; great-aunt Elizabeth Vörös; aunt Eszti Pigniczky (Endre Szentkirályi); cousins Keve, Bendegúz, Vajk, and Enese; uncle Andrew Udvarnoki; aunt Villö Gerö (Zsolt Andrasek) and cousins Sára, Samu and Emma; aunt Borbála Gerö (Ákos Pogány) and cousins Áron, Emese, and Vera; uncle Dr. Domokos Gerö (Dr. Eszter Simon) and cousins Anna and Blanka; and numerous loving relatives, friends, classmates, scouts, and their parents and teachers in the U.S. and in Hungary.
Luca is preceded in death by her grandfather, László Pigniczky. A standing room only memorial service for Luca was held at Saint Mary’s College Chapel on Dec. 9. 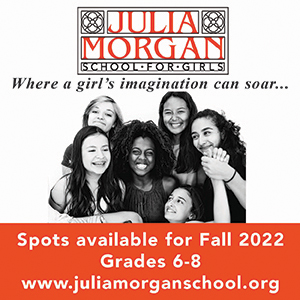