In preparation for the ongoing fire season, the cities of Lamorinda teamed up with Contra Costa County to hold a practice evacuation to test emergency warning systems and to ready residents for the possibility of wildfire conditions that could necessitate the most feared  response.
The county’s Community Warning System (CWS) texted and called Lamorinda residents Saturday, July 31. This large-scale test was planned to ensure the program was working as intended.
“The exercise was very successful and met our objectives of increasing interoperability between police and fire agencies in the Lamorinda area and providing an opportunity to test the CWS system at scale,” said MOFD Fire Chief David Winnacker. “This is the third year we have run evacuation exercises and intend to continue them in advance of fire season in the future.”
According to the Orinda Police Department, all three of Lamorinda’s police stations worked alongside MOFD, ConFire, the East Bay Municipal Utility District (EBMUD) and CWS. Other municipal bodies such as the parks and recreation departments were also  involved.
The virtual evacuation consisted of these groups using applications such as ZoneHaven (https://community.zonehaven.com) to see what communities would be affected by this virtual fire.
Calls and texts were sent out to registered residents within Lamorinda in intervals that started from 9:30 a.m. to about 11 a.m.
There were four main objectives in mind for this exercise, according to Dennis Rein, MOFD’s emergency preparedness coordinator.
The first was testing communications between fire and law enforcement about evacuations; the second was testing the CWS on a “large-scale incident;” the third was testing how to use the ZoneHaven Evacuation interface from the field; and the last was to practice the “communications flow between fire, law, CWS and residents,” according to Rein.
Communication was centered on smoothing out steps that happen prior to evacuating residents.
This drill “really focused on interagencies working together,” said Julie Sparks, the Lamorinda Community Emergency Response Team (CERT) Registrar. “It will be really vital for this upcoming fire season if and when things get crazy.”
Streamlining the evacuation process, according to Sparks, will help everyone involved because the fire departments cannot evacuate residents, but only give suggestions to evacuate to law enforcement who then can contact CWS and send out those notices.
While the goals for this exercise were mostly set on behind-the-scenes improvements, 33-year long resident of Orinda, Gail McIntyre was happy to take part physically in the exercise.
After purposefully planning a busy morning to ensure she was surprised when a call came to evacuate, McIntyre was ready to evacuate at a moment’s notice.
She made the decision to “actively participate and do everything I could to act like it was real,” after hearing the notice about the drill.
McIntyre kept her phone unavailable through her morning and was genuinely surprised when the alert to practice evacuating came through later than she had anticipated.
“I went upstairs, got my to-go suitcase and Manila envelope with my things I needed. I had dog and cat carriers ready, got pets in and stuck them into the back of my already packed-up SUV,” she said. “It took me all of about 8 to 10 minutes total.”
While she admits she is not sure how she would react in a true emergency and wondered if 10 minutes was fast enough for evacuation, she was “pretty happy with that.”
This year’s drill allowed her to rethink some of the prep she had in place from last year.
“Last year the evacuation drill notified my phone when I still had it off [from the night before],” McIntyre said. “So, I connected my landline to the CWS in case it came at night.”
This year’s drill increased sign-ups to CWS significantly. In the City of Lafayette, 418 people registered; in Moraga 273; and in Orinda, 476.
To register your landline or cellphone to CWS, visit https://cwsalerts.com and press “sign in” to either make an account or view your current account information. Any issues with your account, call CWS directly at 925.655.0111 or email cws-staff@so.cccounty.us. 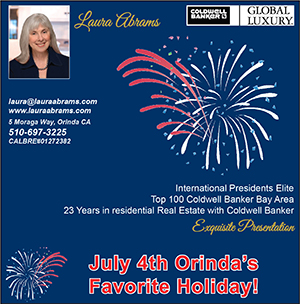