The Large and the Small of It

This month brings two special features and, as usual, both offerings are worth seeking out, one for its searing drama and the other for its uniqueness during the time of the film’s release.
The first is the “heavier” of the two films. Offered with pride by the International Film Showcase (IFS), Jo Alice Canterbury and Efi Lubliner present Hive.
More than any of the other films the IFS has shown, this one is truly international. Four countries – Kosovo, Switzerland, Albania and the Republic of Macedonia – pooled collective resources to deliver a searing film about determination, resolve, difficult choices and the unfortunate fact that many countries still hold to outdated ideas about sexual equality.
Finding herself alone and with little in the way of support, Fahrije (Yllka Gashi) bands together with friends to start a business selling a local culinary delicacy. This does not go over well with the local men, and she is met with all sorts of obstacles, public and private.
Looking at all the awards this film has won, including three at the Sundance Film Festival, should be all you need to encourage you to catch this when it premieres at the Orinda Theatre Nov. 12, but just in case you need further motivation, check out the trailers and more information at www.internationalshowcase.org.
Our next offering is brought to you by that fairly new and welcome monthly feature, The Chiller Diller Theatre with The Incredible Shrinking Man. Released in 1957, the film would be easy enough to dismiss as just another of the many cheesy science fiction movies that came out around that time.
This one, however, managed to rise above the schlock that so predominated theaters, especially drive-ins. The premise is self-explanatory and the cause is cliché (didn’t the ants from the 1954 sci-fi film Them grow when exposed to the same thing?), but aside from that, this film deals with deeper philosophic ideas like love, life compatibility, mortality and transcendence.
Much of this may be because of the performances, which are subtle and tinged with longing, but it’s the direction from Jack Arnold, a seasoned pro with a wide and varied resume, which really elevates this movie.
The special effects are also noteworthy. Though our trained (and somewhat spoiled) eyes will clearly see the seams, when taken with the realization that absolutely no computers were used in the making of this film, the visuals are still impressive.
As usual, Orinda’s very own horror royalty, Lord Blood-Rah, will host this film at the Orinda Theatre, Nov. 20 at 9 p.m. For more information, visit www.orindamovies.com.
So, until December, remember to always go towards those wonderful images made of sound and light – for that’s where the reel magic lies. 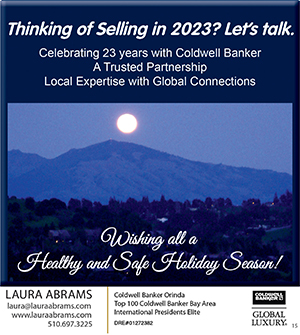 Alison Burns Presents Her Second Book – This One About Orinda