Steve Harwood is so passionate about the future of one of Orinda’s most cherished edifices, the Orinda Theatre, he created a nearly 18-minute YouTube video presentation charting creative ways to keep it sustainable for years to come.
For the last 12 years, Harwood has organized Lamorinda Idol, been a singer throughout his life, done some acting and wrote and directed youth musicals. He’s also been Chairman of the Board of Playhouse West, a professional East Bay theater company, and has provided sound for countless entertainment events.
Needless to say, the Orinda Theatre is important to him and also to the community he’s lived in for 44 years.
“I think it is important to the community to see the Orinda Theatre thrive for a number of reasons,” he said. “It is convenient to have film and other cultural offerings right here in our backyard. The success of the Orinda Theatre leads, in turn, to our local restaurants prospering and contributes to maintaining the vitality of downtown Orinda. Finally, the theatre is a magnificent example of art deco style and iconic in the area. We need to care for it.”
The ever-changing landscape of movie-viewing and technological advances with a myriad of streaming platforms threatens the economic viability of this and other movie houses.
The pandemic’s economic effects, coupled with a steep monthly operational bill between $15,000 and $18,000 a month to cover rent, utilities, insurance, equipment maintenance and more, further threatens the Theatre’s survival.
Harwood’s goal for the future of the Orinda Theatre is that it becomes a suitable venue for a broad range of entertainment and activities, not just for films.
Offering live entertainment is one way to achieve that goal.
“In the near term, readers can help by patronizing the theater and becoming a subscriber of the Live at the Orinda! cabaret series,” he said. “Longer term, financial and other support will be required if modifications to the theatre are to be made so that it can serve as a venue for a broad range of entertainment in addition to film.”
In his video presentation, Harwood stated the playhouse was built in 1941 and slated for demolition in 1984.
“It was saved through the efforts of preservationists and reopened in 1989 when two additional screens were added,” said Harwood. “The Orinda Theatre is part of the Theatre Square complex, which is owned by Dunhill Partners, LLC, with equity primarily from a Texas-based entity with management from Vacaville.”
Located at 4 Orinda Theatre Square, the East Bay landmark currently has three screening rooms to seat 750, 189 and 47 guests.
It boasts a spacious lobby, a wine bar called Cine Cuvee and a newly installed, state-of-the-art movie screen in the main auditorium. A complimentary bag of popcorn with real butter is offered on Wednesdays.
Orinda Theatre owner and operator, Derek Zemrak of San Ramon, is equally impassioned about the theater’s future and the community benefits.
“Arts are important to any community, expressing the values and ideas of the people within the area,” said Zemrak, who has produced several movies over a span of 25 years and produced music for several television shows. “Losing the arts results in loss of focus in a community.”
A member of the Screen Actor’s Guild and the Producer’s Guild of America, Zemrak said there are ways people can help: “We have an ongoing GoFundMe campaign (https://bit.ly/3ILq24G), which people can donate to, but the most direct way, would be to attend a movie or special event.”
Michael Williams, co-producer with Zemrak of the Live At the Orinda! concert series, said their goal for the cabaret series – which began in 2018 – is twofold: “One, to bring world-class Broadway, cabaret and jazz artists who excel in this intimate style of performing and who don’t often perform in the Bay Area, to the Orinda Theatre.”
Williams added, “Two, to create a sense of community among live music lovers. It’s a beautiful community here and an untapped market we’ve discovered.”
Williams said artists they’ve brought to Orinda include Tony, Grammy, Emmy and Academy Award-winning and nominated artists such as Rita Moreno, John Lloyd Young, Maureen McGovern, Ann Hampton Callaway, Liz Callaway, Lillias White, Karen Mason, Andrea McArdle, Lorna Luft and Amanda McBroom, to name a handful.
The concert series is subscriber-based. Those who subscribe to the entire season get discounted ticket prices, their own reserved seats for the season, complimentary drinks and more. To subscribe, people can visit www.orindamovies.com, or stop by the theater.
The Orinda Theatre turned 80-years-old last month, and Williams is proud to have access to such a remarkable hippodrome.
“Just having this historic theater that has been so lovingly and painstakingly restored and maintained in our own neighborhood is such a gift,” he said. “And the opportunity to see world-renowned artists perform in our own community in this beautiful theater just takes it to a whole other level.”
On the heels of the pandemic, Harwood is excited to see the theatre come alive again: “Dec. 5 was a special night in Orinda, as the monthly Live at the Orinda! cabaret series resumed following a COVID-19 hiatus.”
He concluded, “Those who attended in the sold-out 189-seat room at the Orinda Theatre were treated to a world class cabaret event featuring internationally-renowned jazz vocalist Spencer Day and his combo. The ever-changing lighting matched the mood of each song, and the sound was perfect. The audience left exhilarated. This was an example of seeing the Orinda Theatre thrive.” 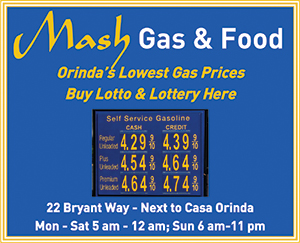 Welcome New and Returning Office Leaders to Orinda and Moraga

Catching up With District 16 Assemblywoman Bauer-Kahan