Orindans will not be in short supply of world-renowned entertainment when the Live At the Orinda! concert series presents two shows this month at the Orinda Theatre. The first features Debbie Gravitte May 1, and the other stars Christine Andreas May 22.
Born and raised in Los Angeles, Gravitte moved to New York City to pursue her career in theater. She’s a Tony Award-winning jazz singer with her tour-de-force performance having come in Jerome Robbins’ Broadway.
She’s excited to perform in Orinda, especially since COVID-19 shut down original plans.
“I was a last-minute sub and then the pandemic took over the land,” said Gravitte. “This will be my debut, and I cannot wait. Everyone there has been incredible, in particular Orinda Theatre’s Michael Williams.”
Intensely smitten with Broadway and big band music, Gravitte has also brought credit to her name with performances in Chicago, Les Miserables and They’re Playing Our Song.
She shared how it all started.
“I was always loud and charismatic, with an emphasis on loud!” she said. “I fell in love watching Damn Yankees on my local television and, particularly, Gwen Verdon, and immediately ran to dance classes and that started it all at the time. It makes me feel at home to entertain people.”
Her mantra is, “life is short, live your life,” and she hopes her audience in Orinda will “have an afternoon that transports them – however they want to be transported!”
Appearing with over 175 orchestras around the world from Moscow, London, Stockholm, Munich and Beijing to the National Symphony with Marvin Hamlisch and the Boston Pops with Keith Lockhart, Gravitte has recorded four solo CDs.
She said she is the proud president of Group5 Productions and has three beautiful children: “Two of my kids are in showbiz all the way.”
“My son (Sam) is an amazing human and that’s what makes me so happy,” she said.
“He’s also wildly talented. I’m hoping that Orinda audiences will get to see him one day!”
Christine Andreas will grace the Orinda Theatre’s stage toward the end of May.
A two-time Tony-nominated singer and actress, Andreas lives in Ridgefield, CT, and could not be more thrilled to finally perform at the Orinda Theatre since she had initially been scheduled for January when the pandemic shut live performances down.
While literally in the middle of the ocean on travel, she took pause for an interview and talked about what she hopes her Orinda audience will take away from her show.
“Me! A little piece of me!” she said. “Singing live in an intimate theater or cabaret space is thrilling both for the audience and singer. You can feel artists breathing, finding their air for the next word or phrase. You can sense them pulling feelings from their life experiences and infusing it into the music. It’s a communion between artists and audience. Pieces of Barbara Cook, Streisand, Tony Bennett, Lena Horne, Sammy Davis Jr., Rosie Clooney, Natalie Cole – so many artists I’ve seen live – have left their mark.”
In concert, Andreas has performed everywhere from Carnegie Hall and the Kennedy Center to London’s West End. Some of her starring roles on Broadway include La Cage Aux Folles (with Kelsey Grammar), The Scarlet Pimpernel, Oklahoma!, On Your Toes and My Fair Lady. She is currently touring the country with her one-woman show, PIAF – No Regrets.
Her kids are following in her footsteps.
“I have a wonderful stepdaughter, Emilie, who is a documentary filmmaker. In fact, she filmed and produced my DVD of PIAF – No Regrets, which is completely stunning if I do say so myself,” said Andreas. “I have a beautiful son, Mac, who is on the autistic spectrum – it’s not a sad story, he’s a pretty happy guy. He blisses out singing in a perfect monotone while listening to my music!”
Andreas’ Orinda show is titled, Love Is Good, and she will perform alongside her Grammy-nominated husband, producer and composer, Martin Silvestri.
“He’s a consummate showman and we’ve worked together for 30 years; so, onstage we pretty much just intuitively bounce off each other all the time. Let’s just say the ball stays in the air, but I’m never quite sure what might come out of his mouth. He’s very funny,” she said. “For example, in my show, when I first stated that my mom used to sing all day long while tending to the house and her eight kids, Marty quipped, ‘Maybe she should have sung a little more at night!’”
Andreas, who was raised on show tunes and standards, the music her mom sang and whose voice filled the house as she sang to the radio or record player, said she believes her love for singing started early on.
“It’s very possible I started singing ‘in utero’ – I mean it!” she said. “I’m sure my mom sang the whole nine months in her lovely alto, and I must have joined in. I love making a joyful noise, I do.”
Both shows are Sunday at 5 p.m. Gravitte, May 1 and Andreas, May 22 in the Orinda Theatre’s intimate 189-seat theater, located at 2 Orinda Theater Square. All seating is reserved with most tickets from $55 – $100 and no drink minimums. For tickets and more information, visit www.orindamovies.com. Live At the Orinda! concert series will return in September. 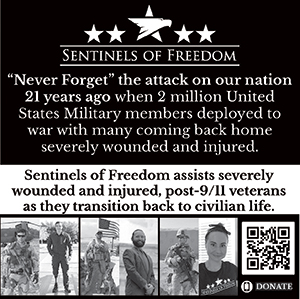 Voters Can Learn More About Candidates at a Series of Public...

My One-Month in the Ukraine War