After a great deal of planning and deliberation, commencement ceremonies for the Class of 2020 for Orinda high school students were reconfigured to accommodate COVID-19 safety precautions.
Miramonte Principal Julie Parks announced May 8 that graduation for every high school in the Acalanes Union High School District will take place June 1.
“The commencement ceremonies will be held on campus and will follow a format that allows for tradition, celebration and adherence to safety protocols related to social distancing,” Parks announced in an electronic announcement to parents. “Many aspects of the graduation will be recorded in advance, but preserving the tradition of in-person diploma acceptance is essential.”
District officials decided students and their families will not be on campus for every facet of the ceremony.
“To ensure proper social distancing, students and their immediate family members will be invited to campus during a specific time frame to participate in a diploma presentation. Professional videographers will film every component of the ceremony and present it via live webcast. Photographers will also be on-site to capture the moment. The webcast will be recorded and available, in a condensed format, after graduation,” the district said.
Parks also devised a drive-thru celebration May 20, where seniors cruised through the traffic circle one last time to pick up their cap and gown and a breakfast burrito to boot.
Typically, Miramonte seniors enjoyed a more celebratory senior breakfast in the cafeteria, accompanied by entertainment and followed by guest speakers in the auditorium, comprising a tradition known as “Post Senior Day.” Previous Miramonte graduates would address the senior class on various topics, ranging from useful to humorous, such as collegiate do’s and don’ts, and tales of life in the “real world.”
“Believe it or not, students said one thing they will really miss is the traffic jam leaving school every day,” said senior class parent advisor Michelle Goldsmith,.“So we hoped to re-create that with this drive-thru event.”
Another popular event, “A Time of Reflection,” also known as Baccalaureate, went virtual this year in the form of a video. It traditionally presented a live and engaging two-hour program of student musical acts and speakers to a packed auditorium.
Initially, student support for a virtual or videotaped Baccalaureate was understandably lackluster, according to event co-chair Leslie O’Brien. “But, in the true spirit of the strength and maturity of this class, the students have rallied,” she said.
Plans for the video included original songs by seniors Elizabeth Becker and Bella Capozzi, and additional musical acts interspersed with heartfelt speeches and peppered commentary from students.
“The added bonus this year,” O’Brien said, “since we can’t meet in person, the students will have a video keepsake.”
O’Brien said the last-minute outpouring of student enthusiasm for concocting a “Plan B” for this beloved event fills her with pride and emotion. “With the new video format, we can incorporate even more students than before.”
The performance was set to be released online May 29, the original date of graduation.
Provided that social distancing guidelines have eased by the middle of summer, tentative plans are in the works for some sort of re-creation of Senior Ball July 25. The event was previously scheduled for May 9 at the Bentley Reserve in San Francisco.
Nicole Radlow, outgoing president of the Miramonte Parents’ Club, said, “It‘s not as easy as you would think, crafting an entirely new, socially distant graduation ceremony for 320 students and their families. Kudos to Julie Parks and the other principals for putting in the time to devise this solution and find media partners to livestream the action. It may not be exactly the event our kids dreamed of, but at least they will have had a sense of ceremony and celebration.” 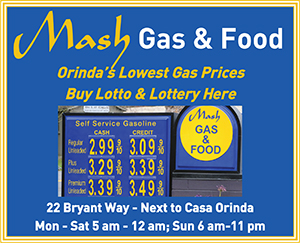